It’s Tuesday, March 10, 2020 at 1800 PT, and the U.S. response to the Covid-19 outbreak has improved drastically. Unfortunately, there are still many people in denial. Still many people posting flu death numbers and comparing them to the currently minimal number of deaths from this coronavirus. This includes our president, who almost certainly doesn’t actually believe this, but is (rightfully) very concerned about his election chances if the economy crashes. 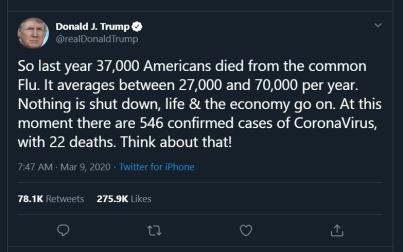 Unfortunately, too many people just don’t understand why a good number of reasonable people are so concerned. They say its news generated fear, Democratic driven panic designed to undermine Trump so they can win the election. They don’t believe in science and math and the idea that viruses are not all the same. 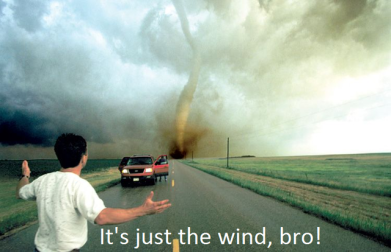 The problem is that people don’t quite understand that the numbers we’re seeing RIGHT NOW are not what is actually happening right now. We have a time machine here. When we see the infection and mortality numbers, we’re actually looking 7-14 days into the past. And, looking into the past and extrapolating forward with no concept of the power of exponential growth is just dangerous. People are starting to get it, but unfortunately, not enough people are understanding it quickly enough.

As I write this, the NCAA has just announced that there is no plan to change any aspect of March Madness, including the massive crowds expected at every venue. Trump literally announced less than an hour ago that he would be holding a Catholics for Trump rally in Milwaukee in 9 days with Catholics from around the country. (Spoiler alert and prediction number one…it won’t happen!) The denial is just scary.

So, in an attempt to put more of my reputation on the line, I have a few more predictions. These are in addition to the predictions I made in my last blog here: https://authorrickfuller.com/2020/03/08/donald-trump-doesnt-want-you-to-know-this-critical-information/

Now, a few things that will be implemented in Las Vegas, one of the areas that will be absolutely devastated by this outbreak. After all, Vegas is nothing but a mirage, providing nothing of value but entertainment and built on a lie that you might get lucky and rich. We rely on crowds and crowds are about to become as appealing as licking a cube of plutonium.

The bad part of making predictions is that although in a vacuum it’s devastating if these things happen, I still feel validated when my prediction comes true, which means I end up secretly hoping for them to happen so I can get that validation. It’s not a good feeling, but luckily I’m fully stocked on alcohol so I can drown the confliction nightly.

View all posts by authorrickfuller